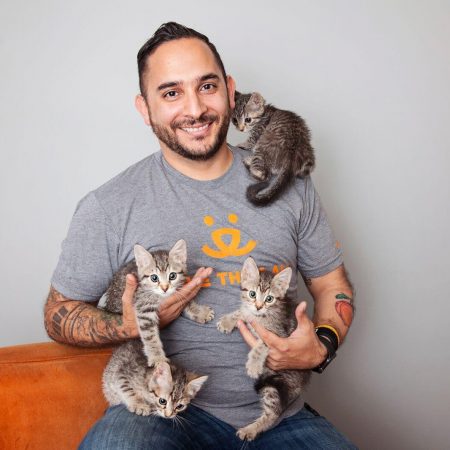 As the senior director of national mission advancement, Marc Peralta brings together Best Friends’ newest initiatives and aligns them with all things related to developing the knowledge and capabilities of individuals and organizations involved in lifesaving in order to empower them to achieve No Kill in their own backyard. These initiatives include shelter outreach, mentorship, staff-embedding programs, community cat programs, No Kill leadership training, and emergency response training and operations.

Prior to this position, Marc served as the senior director of regional programs for a year, overseeing the foundation of building out and expanding Best Friends’ strategy, partnerships and programming in the key Southeast and Mid-Atlantic regions. Before that, Marc served as the executive director for Best Friends in Los Angeles for five years. In 2011, Los Angeles was struggling to save just over half of the cats and dogs entering city shelters. Because of Marc’s and Best Friends’ leadership, L.A. is on track to reach a 90% save rate. Marc’s duties as executive director included operations for the Best Friends Pet Adoption and spay/neuter center in Mission Hills, California, and the NKLA Pet Adoption Center in West Los Angeles, as well as leadership of the NKLA Coalition, which comprises more than 140 animal welfare organizations.

Prior to the PSPCA, Marc worked in animal care manager roles at the Nevada Humane Society in Reno, Nevada, working with the team there to bring Washoe County to No Kill status in 2008 (it remains No Kill today), and the Humane Society of the Pikes Peak Region in Colorado Springs, Colorado.

Keeping Families Together: The Future of Animal Control

Public Safety and Lifesaving ARE Compatible

Imagining the Future of Animal Welfare

Hear from some of the most influential voices in animal welfare as they imagine what the future holds for homeless pets.