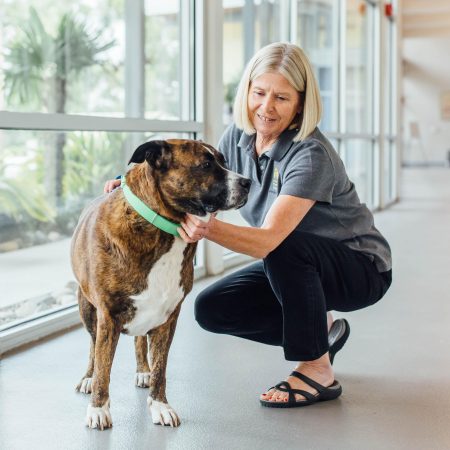 Denise Deisler joined the Jacksonville Humane Society in September 2011. She immediately built bridges and developed productive partnerships, increased revenue while reducing expenses, recruited an energetic, talented and enthusiastic board, and implemented new initiatives that contributed significantly to the community’s no kill goal. New programs like a kitten nursery, community resource center for retention and intervention and a renewed focus on transfers from the city’s shelter resulted in an additional 1,000 lives saved in her first year alone. Fall 2018 will mark the fifth year in a row that Jacksonville has achieved a city-wide live release rate of 90+% making it one of the largest communities in the United States to do so.

Denise led the campaign to replace the JHS shelter that burned to the ground in 2007 and raised $15 million. She oversaw the design and construction of the new 44,000 square foot facility. The building includes an adoption and education center and a community resource center attached to the previously constructed public hospital. JHS moved into the new center in Nov. 2017 – ten years after the devastating fire.

Denise enjoys training, mentoring and consulting on a wide variety of topics including building successful partnerships, community engagement, board and staff development, and model no kill programs. She currently serves on Best Friends Animal Society’s No Kill 2025 steering committee and leads the No Kill Florida committee. She is also honored to participate with Petco Foundation and Purina leadership groups.

Prior to coming to Jacksonville, she was the executive director of the Humane Society of Manatee County. Denise orchestrated a public/private partnership that ended trap and kill for feral cats and she led lobbying efforts which resulted in the county becoming the first municipality in the state of Florida to formally adopt a no kill plan.

As the Chief Operating Officer of the Richmond SPCA Denise collaborated on efforts that transformed the City’s approach to animal homelessness and a capital campaign that raised $14.2 million for the construction of a new humane care and education center.

Want to know what the top-performing shelter directors in the country have to say about the term No Kill? Ryan Clinton moderates this panel with expert voices including Dr. Ellen Jefferson, Kristen Hassen-Auerbach, Rebecca Guinn and Teresa Johnson. Come hear from the people building lifesaving momentum in their communities what this term means for their work.

What Qualities Do Emerging Leaders Need to Succeed?

Are you trying to grow as a leader? Thinking about succession plans and how to grow leadership within your organization? Tawny Hammond and Denise Deisler present a foundation for understanding how to cultivate the leadership abilities that will enable your or your staff to reach their highest potential.